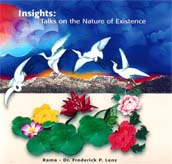 When you meditate, always try and be hopeful.

It's very important. It's necessary to realize the infinite possibilities that life offers you at any moment. Most people are engaged in a limited dharma. They are traversing in a given lifetime through a sequence of possible events, but the events are not too widely chartered in the sense that the possible variations within that sequence are limited. Meditation offers us the prospect of changing that. The suggestion is that instead of staying with the destiny that you have now, that you've incurred through previous karmas, actions in this life and other lives - family, social position, economic or religious background, racial background - it's possible to transcend all of that and within the structure of a lifetime to be born again many times.

We're in a particular field of attention because of how we think.

The Tibetan doctrines are far reaching. They are really very similar in essence, I think, to the doctrines of yoga, Buddhism of different types, Taoism, the very early American Indian religions. There seems to be a common thread that unites them all, which is the perception of that which is truth. The Tibetan versions, with a 's', of paradise are many. Tibetan mysticism is a mixture of many forms - of tantra, of the Bon religion, of Buddhism, of course, as brought in by Padmasambhava. Naturally, there've been some very well known Tibetan teachers and gurus - the Dalai Lamas and Tibet's most famous teacher, Milarepa, and his guru Marpa the Translator. The texts that have been brought to light in the West, particularly since the Chinese occupation of Tibet, are rather obscure. These are ancient books, the tantras, which were written thousands of years ago depicting ways of attaining super powers, realizing truth, ascending into higher spheres of consciousness and things like that.

The knowledge of what occurred in Tibet was very limited in a spiritual sense in the West, primarily to Evans-Wentz who went to Tibet and began writing his books, and a few other adventurous souls who journeyed into an unknown land and as foreigners studied its religion and culture as best they could. Naturally, it was impossible for them to penetrate the deeper inner circles of Tibetan mysticism. In many cases fortune brought them to a distinguished teacher or lama, someone perhaps who was somewhat enlightened. But the true secret teachings of Tibet have been handed down orally, meaning not so much that they have been transmitted in words, but they had been transmitted from teacher to student in an unbroken chain for thousands of years.

Of course, tradition is not totally necessary. Any individual is capable of realizing the truth at any time. And when they do that, no tradition is necessary, no chain, no lineage. Once you have realized the truth, once you become consciousness itself, then you go beyond all such distinctions as lineage and teachers and things like that. That happens infrequently. Most people seem to have a teacher or a series of teachers who impart to them not so much a verbal message, an explanation - although that's done, certainly - but rather the essence of existence, the truth, which is transmitted through the kundalini from teacher to student and the very rigorous training process that anyone must go through, either with a teacher or on their own, in order to develop the super powers and enter in the supraconscious states of samadhi. The teacher, the guru, would of course, oversee this training process.

The essence of the Tibetan knowledge, then, as it's come out, which it has only partially, has come either through the texts, the tantras, or things like The Tibetan Book of the Dead, or through a very small number of Tibetans who left Tibet with the Chinese occupation and decided to present some of the teachings to the world.

The idea inherent in much, but not all of Tibetan Buddhism, is that the teachings are secret, not in the sense that you can't tell someone, but in the sense that they won't understand. We find a parallel to this in the stories of Carlos Castaneda and his teacher Don Juan, where Don Juan, in Tales of Power, presents Carlos with a piece of wisdom called the sorcerer's explanation, which is an understanding of how consciousness and reality works. And he holds off for many years. It's only about a six-line explanation, at most a paragraph or two, and he doesn't tell Carlos for many years, not because there was anything secret that needed to be withheld but because Carlos wasn't at a sufficiently high enough level of evolutionary consciousness to understand the import of what was being expressed.

Click here to download this talk - Free
The downloads of the talks are provided by links to the Frederick P. Lenz Foundation for American Buddhism