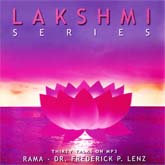 Tantric mysticism. Tantra is a reconciliation, a joining together.

In this universe there appears to be opposition. Opposition is a point of view. Everything is one. There is only one eternal reality. Yet there are two - man and woman, sun and moon, dark and light, morning and evening, day and night, forward and back, in and out. Tantra is the reconciliation of opposites, seeing that opposites are complements.

Tantric mysticism is the practice in which we use all the other yogas.

Mysticism is the experience of eternity, beyond the body. In mysticism, a person experiences the spirit world, the alternate planes of reality. Mysticism also is the study of the physical world, but not from the physical perspective. The study is inside out. Everything is viewed from within.

In most studies we use our world, this earth, this island in the middle of eternity, as our measuring point. The island is a certain length. We use that length as our compilation factor for measuring the distance from here to the next star. On the island, a tree grows a certain way. So we will measure trees that we find elsewhere in the universe by the tree that grew on our home planet, on our island. People are a certain way, life is a certain way, death is a certain way.

Everything in this world is a template which we use for measuring, judging, quantifying, classifying and amalgamating everything else. When we extrapolate, we extrapolate our theories and our philosophies based upon our physical lives, including the life of the body; the life of the world that we perceive through the body and the senses; the subconscious workings of the mind and the conscious workings of the physical mind - thought analysis, abstraction, inductive/deductive methods of reasoning and logic, free association, the computer functions of the brain - memory, recall, projection of possible futures; emotion as regards the body, emotion measured by the body - my body wants, my body feels, my body feels love, my body feels self-pity, sorrow, courage. The body is the primary measuring unit; it's the angstrom by which we quantify the physical world. All of our excursions are made through the body. Even our mental excursions are made through the body by using the body's knowledge and the body's experience, by drawing on the body's resources.

Mysticism has nothing to do with the body from the body's point of view. In mysticism, we have stepped beyond the body. Or it might be precise to say we never considered ourselves to have anything much to do with the body anyway. We were never really in the body. The body is another interesting piece of furniture in the house that we happen to be walking through. This gives us, not just a different perspective, but a series of different perspectives because our angstrom, our measuring unit, will not be the body or this world but all of the worlds, all of the planes of being. So rather than coming from one culture and viewing and measuring everything in our explorations of the world by our culture, we're much more cosmopolitan. We have the views at our fingertips of all cultures.

We all know that when the white race came to America, they thought of the Indians as little more than animals; their religions were nothing - ritual dancing. The systematic extermination of the Native Americans was permissible because from the limited point of view of the white race it was impossible to understand what the Indians were all about, why they didn't build cities, why they had no interest in building cities. The depth of their religion, their communication with the spirit world, their poetry, their culture, their legends, which are as complex and evolved as the legends and symboligies and systems of any other culture. Their religion is as complex as the religion of any culture in this world. But because they were looking through a glass darkly, they didn't see. What they saw were not Indians but animals, something worthy of extermination. Vermin. A pestilence.

This view is the view of people who have bodies. People who have bodies, who orient to the body culture, view existence with the same limitations. A person who had experienced cultures throughout the world, a Margaret Mead perhaps, an anthropologist, would have come here, had they come first, and discovered a delightful race and lived with them in peace, shedding her own skin, her own cultural milieu, to look inside the hearts and minds of the people without judgment, just to observe. Using her experiences in different cultures, sort of a polyculturalism, to understand the culture in front of her. So she could use the Samoans, the Egyptians, the Aborigines, people who live in the Netherlands, the British. Any group could be used as a frame of reference, using their frame of reference for understanding, giving you multiple possibilities. The computer doesn't have to run on one language, it can run on many languages, many possibilities. And, she would also be able to drop all of these ways of seeing and just look. Perhaps engage in the dance with the Indians. Perhaps take part in their religion and be it.

So this is mysticism. In mysticism, one has experienced billions of alternate planes of reality and brings them to bear and use in understanding. One is a world traveler, an intergalactic, inter-plane traveler. So tantra, then, is something that has to do with any plane of reality or any culture, because it studies not the differences within a culture, but the nature of cultures themselves. And it observes that in any plane of reality, there is opposition, there's contrast. And it is the study of this contrast, the ultimate reconciliation of opposites, accepting that opposites are opposites and they're also complements. Neither and both. And then something else. And this leads to liberation.