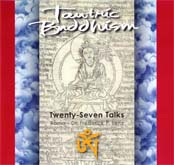 Now I'm going to disagree a little bit here maybe, with certain levels of Buddhist thought. But none of us can really explain it verbally, so maybe this is just a slightly different translation. Let's look at it that way.

How you conduct yourself determines what happens. The state of mind you create and live in inside yourself produces these changes in mental states.

The world of enlightenment is not a world per se in that, obviously, we're discussing nirvana. It's nonstructural, nonbonding, noncausal, nonatomic - no chemical makeup. It's the extant portion of that which is. That's where I happen to reside and come from. I've come from there to here, into a physical formation. But where I come from, there are no sunrises and sunsets, there are no todays and tomorrows and yesterdays. There's none of this. There's no duality. There are no other worlds. It's a timeless, perfect, extant, non-bonding reality. Nonbonding means non-karmic. No cause and effect. No structural basis for anything. Buddhist tech talk - you understand.

So in the world of enlightenment, things just are things, except that they're not things. Once again, we're in nirvana; there's no debating team. So if one becomes enlightened as I did in past incarnations, we leave the structural universes behind, and in a way we don't even have past incarnations at that point because the form that had those incarnations has dissolved in the clear light of reality. Sometimes beings come forth from that particular realmless realm. That light incarnates and wanders around through the samara, kind of looking at itself in various countless forms. We call beings who come from that realm, not that it's exactly a spatial realm, "enlightened."

Then we have the world of the unmanifest - the fifth world, or second, depends on how you're counting. The world of the unmanifest is the undifferentiated reality. That is a world in which there is no form whatsoever. It's the world of samadhi. It's a world where there's no dimension, but yet it has a specific existence as something that's not manifest to the senses. When we say manifest, we mean apparent to the senses. Reality exists beyond the senses, obviously. Otherwise there would be no life. But the sense worlds cannot penetrate, or the senses cannot penetrate the unmanifest. The unmanifest is also different than what we would call the higher astral. The higher astral has formations; there is a sense of time there, although it's completely different than the time here.

So we have the world of enlightenment - nirvana. We have the unmanifest, which is again pretty hard to talk about. That's a world of dissolution, but dissolution is a finite state in its own way. Then down from that we have the higher astral - the realms of the happy spirits, the happy haunts, kind of like at Disneyland. Spirits with a sense of humor - the land of good intentions. This is, when one dies, this is heaven. Heaven is the higher astral. There are countless realms and dimensional planes, existences - they go on forever - that are very beautiful, where beings incarnate for a time, where they exist. Sometimes it seems to be timeless, but it does end eventually - which is why we call it structural - and these are the realms of the higher astral.

The unmanifest, which is next up, is not heaven. It's beyond heaven. Beyond heaven is pure spirit. Heaven we think of as kind of a cloud, a kingdom, happy experiences, beings singing, laughing, being in ecstasy and meditation. You see it in the Buddhist thangkas - you know, where they're all having a very, very serious party up in the higher astral. Everybody's having a good time. But above that is the unmanifest. You can't put that on a thangka. There's no way to paint it. One can symbolically represent it, but the unmanifest is pure spirit. Yet spirit exists and is perceivable by itself, if by nothing else. It knows of its own existence.

The world of enlightenment doesn't know of its own existence. We're beyond both knower and known. There's no conceptual identity whatsoever. Enlightenment is not even conscious of itself - it just is. There's no way to talk about nirvana. It's just riddles.