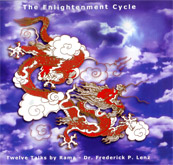 In the Far East, Buddhism is usually practiced in a monastery. You enter a monastery, and you live your life there. You get up at a certain time, you have meals at a certain time, and you tend the garden or copy manuscripts. You meditate at certain times. You study with the master or the teaching monks. It's a certain type of life. But in the West, while certainly there will be Buddhist monasteries I'm sure, it seems to me the best form of practice is to live in the world, to have your own home or apartment, condominium, have your own car. It just seems to work better here.

Think of career as a vehicle. It doesn't have to be down time.

The spirit of the West, of America, is different than the East. The cultural conditioning is very different, and it seems to be harder for people here to work in teams. It seems to be more difficult for people here to live in harmony, in a monastery. Certainly there are monasteries and convents that have flourished in the Christian tradition for a long time in Europe and America and other places in the world. But a Buddhist monastery has a certain chemistry. There's a certain laughter, a certain excitement, a certain brightness and ebullience, and it's hard to capture that here. I think that same brightness here is captured in another way, and that's by living and working in the world. It's certainly more challenging in certain ways, and certainly about the same in other ways as compared to living in monasteries in the Far East.

So, as a practicing Buddhist in America in the West, or even in the Far East, in Japan and other places, if you don't live in a monastery then you have to have a job. Even in a monastery, of course, you have a job, usually. But here you have to live and work in the world, and most of the time that people spend in their lives is devoted to working, whether it's school or work. School is preparation for work and it's a type of work, and then later we finish school and go to work. We get a job.

Working is not a nine-to-five experience. It's a lifetime. Most people get up around 6:00 to get ready for work, 6:30, some even earlier, some a little later. Off they go into traffic. They have to commute for an hour or two sometimes just to get to work, spend the day there, commute back. They have to make sure their clothes are ready for the next day. They might have to do some study for the next day if their job calls for it, particularly if they are in a supervising or managerial position, or an R & D [research and development] position.

In other words, for most people, a tremendous amount of time goes into their work. It's the main thing that we do in life to sustain ourselves, just as bodies. It's a very important thing and it consumes a great deal of our energy, and energy is the central study or the component theme of Buddhist practice, of yoga, is the conservation of energy. And that's why people live, or have lived, in monasteries. The idea was, the walls of a monastery are not to keep you in but to keep everybody (Rama laughs), to keep everybody else out because you want to develop a certain type of life and most people in the world have other ideas on the subject. So Buddhists have, for a long time, lived in monasteries so that they can spend a certain amount of time working and a certain amount of time meditating. They don't want to use up all their energy in working.

You might say living in a monastery cuts down the commutation time. That alone would give you a couple of extra hours a day to meditate and do all kinds of things. And in a monastery, you lead a relatively simple life. You don't need a lot of possessions. You don't have to work as many hours to sustain yourself so you have more time for play. And spiritual practice is not thought of as an arduous thing or a hard thing, but play. It's the fun of life.

Click here to download this talk - Free
The downloads of the talks are provided by links to the Frederick P. Lenz Foundation for American Buddhism