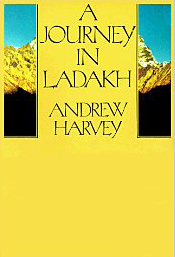 A Journey in Ladakh

The man is so still and expressionless he seems another rock.

I shall never forget the four photographs. They were in the same khaki-coloured encyclopedia that taught me the names of supernovas, the uncanny oddities of the duck-billed platypus, and the colours of the snakes of India. I have seen them in dreams, enlarged and animated, and coloured fantastically; I have searched bookshops on three continents for them, as if they could bring me happiness and good luck. They were photographs of Tibet.

In the first, a man is sitting on a horse looking away at a line of snow-fringed mountains. His shoes are fat, and turned up at the end like Aladdin's.

In the second, a priest is sitting on a throne. He has a hat of huge feathers on, bound in bands of thick gold; his feet are wide apart in shoes that the blurred photograph makes seem like puffs of smoke; on his robes you can just make out three twisting fire-breathing dragons.

The third photograph is of the Potala in Lhasa, the palace of the Dalai Lama. To a child growing up on the flat hot Indian plains there could be nothing as extraordinary as this building, climbing up its small mountain and ringed by larger ones; I peopled each of its rooms with magicians and Oracles; each of its ascending levels became the stages of different miracles, of monks sitting in clouds of fragrance and changing at will into diamonds or light, of serene and ornate ceremonies with bells and chants and waving coloured silk.

The fourth photograph is the simplest. It is of mountains, a semi-circle of completely snow-covered mountains, enclosing a desert of rock wtih one man in it and a yak; the man is so still and expressionless he seems another rock. I would stand at the large window of our house in the evening and look out on the shanty town we lived opposite, its rotting roofs and puddles of filth the children played in, all its noise of radios and dogs, and try to build in its place, slowly and painstakingly, that desert and those mountains. Once I succeeded; for an instant, in the middle of a monsoon downpour, there was nothing but rock and snow from a cold wind.