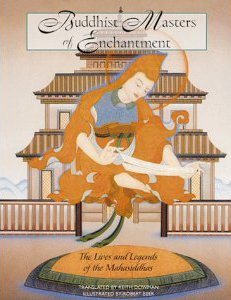 The sage who realizes that all is pure potential flies from the material world and alights in the Buddha-fields of Bliss.

I am called Minapa, the stubborn fisherman.

When plunged into the vast sea of my destiny,

I am survived in the belly of the holy Leviathan

By practicing a yoga meant for Umadevi alone.

After this, even solid rock

Could not bear the weight of my excellence.

Minapa the fisherman spent his life in a little craft out on the Bay of Bengal. Day after day, he would bait his hooks with morsels of meat, cast out his lines of homespun cotton, and wait for the tug that meant he had connected with a creature from the depths.

One bright, calm day, Minapa was plying his trade as usual, waiting patiently for a bite. Suddenly, there came a pull on his fishing line of such enormous strength that the poor little fisherman was yanked headlong into the sea. Minapa had hooked the most gigantic sea creature he had ever seen in his life. And once the Leviathan had seen the fisherman, Minapa became the bait on his own hook. The creature swallowed him whole. But so beneficient was his karma and so remarkable his luck, that the fisherman survived to set up house in the belly of the great fish.

Meanwhile, in the more celestial realms, Umadevi, Divine Consort of Siva Mahadeva, had taken it into her mind to learn her spouse's purest and most secret yogic practices. Night and day, she pleaded and begged and insisted, until Mahadeva knew he would have no peace until he instructed his consort in his dharma.

Yet, until now, his practices had been only for himself. He was uneasy about imparting teachings of such great power lest they fall upon the wrong ears. Therefore, he imposed one stricture. He would instruct Umadevi as she had requested, but he would only do so in the uttermost depths of the sea.