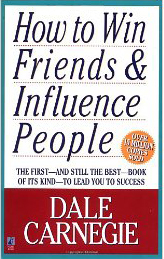 How to Win Friends and Influence People

Begin in a friendly way.

"If You Want to Gather Honey, Don't Kick Over the Beehive"

On May 7, 1931, the most sensational manhunt New York City had ever known had come to its climax. After weeks of search, "Two Gun" Crowley - the killer, the gunman who didn't smoke or drink - was at bay, trapped in his sweetheart's apartment on West End Avenue.

One hundred and fifty policemen and detectives laid siege to his top-floor hideaway. They chopped holes in the roof; they tried to smoke out Crowley, the "cop killer", with tear gas. Then they mounted their machine guns on surrounding buildings, and for more than an hour one of New York's fine residential areas reverberated with the crack of pistol fire and the rat-tat-tat of machine guns. Crowley, crouching behind an overstuffed chair, fired incessantly at the police. Ten thousand excited people watched the battle. Nothing like it had ever been seen before on the sidewalks of New York City.

When Crowley was captured, Police Commissioner E.P. Mulrooney declared that the two-gun desperado was one of the most dangerous criminals ever encountered in the history of New York. "He will kill," said the Commissioner, "at the drop of a feather."

But how did "Two Gun" Crowley regard himself? We know, because while the police were firing into his apartment, he wrote a letter addressed "To whom it may concern." And, as he wrote, the blood flowing from his wounds left a crimson trail on the paper. In his letter Crowley said: "Under my coat is a weary heart, but a kind one - one that would do nobody any harm."