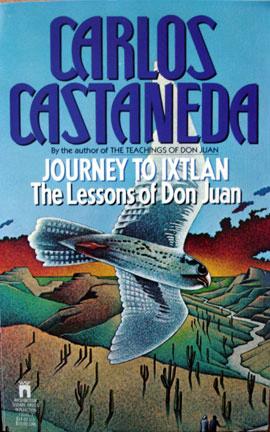 You are making yourself accessible to power; you're hunting it and I'm just guiding you.

"I understand you know a great deal about plants, sir," I said to the old Indian in front of me.

A friend of mine just put us in contact and left the room and we had introduced ourselves to each other.

The old man told me that his name was Juan Matus.

"Did your friend tell you that?" he asked casually.

"I pick plans, or rather, they let me pick them," he said softly.

We were in the waiting room of a bus depot in Arizona. I asked him in very formal Spanish if he would allow me to question him. I said, "Would the gentleman [caballero] permit me to ask some questions?"

"Callabero," which is derived from the word "caballo," horse, originally meant horseman or a nobleman on horseback.

He looked at me inquisitively.

"I'm a horseman without a horse," he said with a big smile and then he added, "I've told you that my name is Juan Matus."

I liked his smile. I thought that, obviously, he was a man that could appreciate directness and I decided to boldly tackle him with a request.