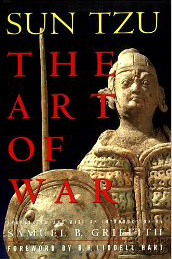 The Art of War

Translated by Griffith and Hart

When the trees are seen to move the enemy is advancing.

1. War is a matter of vital importance to the State; the province of life or death; the road to survival or ruin. It is mandatory that it be thoroughly studied.

Li Ch'uan: 'Weapons are tools of ill omen.' War is a grave matter; one is apprehensive lest men embark upon it without due reflection.

2. Therefore, appraise it in terms of the five fundamental factors and make comparisons of the seven elements later named. So you may assess its essentials.

3. The first of these factors is mortal influence; the second, weather; the third, terrain; the fourth, command; and the fifth, doctrine.

Chang Yu: The systematic order above is perfectly clear. When troops are raised to chastise transgressors, the temple council first considers the adequacy of the rulers' benevolence and the confidence of their peoples; next, the appropriateness of nature's seasons, and finally the difficulties of the topography. After thorough deliberation of these three matters a general is appointed to launch the attack. After troops have crossed the borders, responsibility for laws and orders devolves upon the general.

4. By moral influence, I mean that which causes the people to be in harmony with their leaders, so that they will accompany them in life and unto death without fear of mortal peril.

Chang Yu: When one treats people with benevolence, justice, and righteousness, and reposes confidence in them, the army will be united in mind and all will be happy to serve their leaders. The Book of Changes: 'In happiness at overcoming difficulties, people forget the danger of death.'