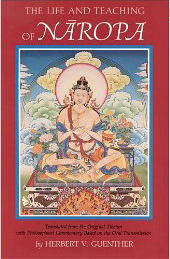 The Life and Teaching of Naropa

The Dharma has become a river. Samsara's wave, that dazzling picture of desire, of its own has passed away.

Our universe which is called sTon-gsum mi-mjed (Trisahasrasahalokadhatu), has twenty-five levels, one above the other, and lies in the hands of the primordial Buddha Gans-can mtsho. On its thirteenth level there are four continents of which the best is our human world. Here in the midst of some hundred thousand towns, in the city 'Dzam-bu in Srinagara, a district of Bengal in the East of India, there stood a palace of a king who possessed the means of exquisite enjoyments on earth. Here Naropa was born.

Naropa's father was the great king Zi-ba go-cha (Santivarman). He was born with all the major and minor lucky marks, of excellent character, and with great discriminating awareness light shone from his body at times. He married dPal-gyi blo-gros (Srimati), daughter of the great king sKal-ldan grags-pa (Srimatkirti), whose virtues had been earned in former lives. Together they exhorted their subjects to live worthily.